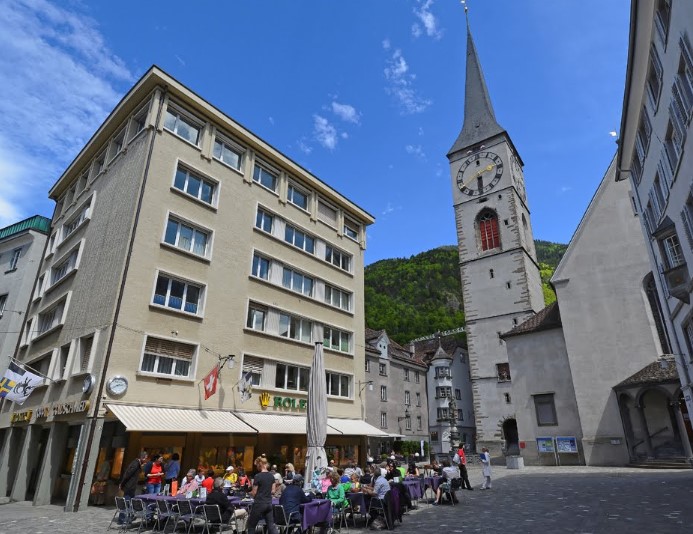 Fig.1. Picturesque views of the city

Chur. An Integral Part of the Swiss Scenic Route

Chur is one of the oldest cities in modern Switzerland and the oldest continuously populated city in the country. The old part of the city still retains the signs of an authentic medieval culture. And, in spite of the fact that Chur was burnt down and destroyed in the middle of the 15th century, it was soon restored. Most of the city's ancient buildings were erected in the 16th century, but several medieval towers and cathedrals dating back to 14-15th centuries have been preserved.

What Makes Chur Stand Out?

The city itself is of great tourist value for Switzerland, as it is visited by tens of thousands of tourists every year. Here you can admire the facades of ancient buildings, dine at one of the exquisite restaurants, or take a tour of one of the city’s numerous museums. The museums and exhibitions here can vary greatly - from wine-making to sewing machines.

The city is rather small, but densely populated. The area of no more than 20 square miles has over 30,000 residents plus another 10,000 tourists. Due to this fact, the traffic here may sometimes become impeded, and that’s where a taxi service in Chur becomes indispensable. If you wish to explore the sights, it is definitely better to order a cab with a local driver, who’s familiar with all the back streets and alleys.

Chur is a city rich in architectural monuments and other sights. It is a good idea to begin your journey from the Town Hall on Postrasse. The building, painted in yellow and having only two floors, is a prime example of the Renaissance architecture.

And don’t pass up the church of St. Martin. This is one of the largest Protestant churches in the world, giving off a gloomy Gothic vibe. The locals consider it to be the main attraction of the city. The church is as beautiful from the outside as it is inside, primarily thanks to the three large stained glass windows created by Augusto Giacometti in 1919.